The Standing Rock Sioux tribe is blocking construction of the Dakota Access Pipeline, a current fossil fuel buildout. Local police are attacking them in defense o 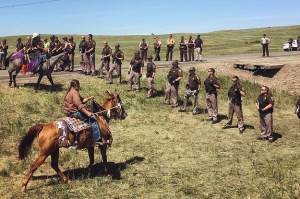 f the fossil fuel company, Energy Transfer Partners, rushing to complete the project, pushing thru sacred burial sites and most likely contaminating drinking water. Many other tribes, organizations, municipal groups and unions support their stand, even our Philadelphia City Council. More on their own website (standwithstandingrock.net).

For a historical understanding of the situation we’re faced with as a nation, see NYC Stands with Standing Rock Collective. 2016. “#StandingRockSyllabus.”.

Get your news directly from the folks on the ground, via their website (standwithstandingrock.net/category/news/) or Facebook page (facebook.com/Standing-Rock-Sioux-Tribe-402298239798452/). Know that Facebook posts, especially videos, sometimes get deleted.

We’ve got a local solidarity group in Philly, which is active in local protests. Some have targeted local branches of the banks listed below. Meet them here (facebook.com/PHILLYNoDAPLSolidarity).

Noticing the public uproar about what’s happening at Standing Rock, Yes magazine published a list of the 17 banks funding the aggressive Dakota Access Pipeline (DAPL). This list includes many European and Asian banks too, so we’ve culled it to just the US banks that many of you may have accounts with, notably:

If you’re ready to move your money from any of the above banks, we recommend a local bank or credit union, one that invests directly into the Philadelphia region.

Multinational Banks, and why

Though we hesitate to promote multinational banks, we understand the convenience of branches at majors cities, especially if your life is in transition. This list is for you!

Updates & Media about divestment from DAPL

To date, one bank, DNB of Norway has divested. See How Indigenous Activists in Norway got the first bank to pull out of the Dakota Access Pipeline.

Have updates to this page? Please let us know!