The only conditions modern humans have ever known are changing and changing fast. It is tempting and understandable to ignore the evidence and carry on as usual or to be filled with doom and gloom…. We need to move beyond guilt or blame and get on with practical tasks in hand.

In response to his call to action, we tried to determine which nations are leading to reduce their CO2 emissions. We’ve searched out facts on trends for CO2 emissions of advanced/developed countries. Here they are, along with some analysis. We will focus on:

Who has been most effective at reducing CO2 emissions at the highest rates recently?

Table 1 shows countries listed as ‘advanced economies’ by the International Monetary Fund, along with their annual average rate of CO2 emissions during 2010-2017 [a] [b].

Since climate change is driven by cumulative CO2 emissions in the atmosphere, it is important to look at the countries in Table 1 from the perspective of how much each country contributes to global emissions.

This is where a country’s CO2 emissions per capita help to see the whole picture better, since it normalizes variations in emissions due to population differences [c].

We see in Figure 1 that the US has the second highest per capita CO2 emissions rate. 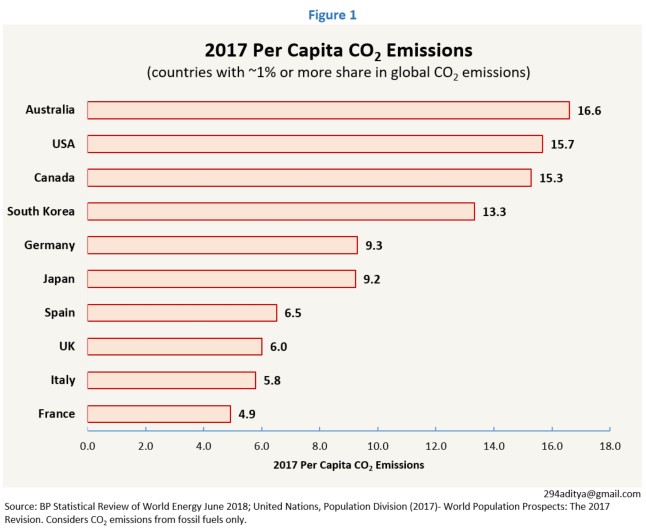 Having the largest population and the 2nd highest per capita emissions among advanced countries makes it a priority for the US to reduce CO2 emissions[d].

But at what rate do we need to be reducing our emissions? Would it be enough if the US was as effective as Denmark & the UK at reducing emissions?

The race is on! The US must reduce emissions faster than any nation

The UK has a similar standard of living as the US. What if we aimed for their per capita emissions, reducing emissions at their rate (2.9% annually)? How long would that take? Figure 2 shows that it would take us 33 years, by 2050.

What if we sped up to Denmark’s emissions reduction rate (3.9% annually)? It looks like it would take us 24 years, per Figure 2, assuming of course that we had started in 2017.

the US has got to do better than matching UK’s per capita CO2 emissions levels. We need to aim for net zero per capita emissions before mid-21st century.

If we are to take the recommendation of the October 2018 report from the Intergovernmental Panel for Climate Change (IPCC) seriously, the US has got to do better than matching UK’s per capita CO2 emissions levels. We need to aim for net zero per capita emissions before mid-21st century. This statement is guided by one of the main recommendations from the October 2018 IPCC ‘Summary for Policymakers’ report.

In model pathways with no or limited overshoot of 1.5°C, global net anthropogenic CO2 emissions decline by about 45% from 2010 levels by 2030, reaching net zero around 2050.

We are going to repeat this. To avoid bringing the average global temperatures above 1.5C, worldwide CO2 emissions must become net zero by the year 2050, and each country is responsible.

If our goal isn’t just to match the UK’s annual per capita emissions of 6 metric tons, but to get to zero metric tons by 2050, how fast will we need to go? Looking at Figure 2, 8% annually will get us to 1 metric ton per capita. This is a rate seen never before.

What’ll it take to get to net-zero emissions?

In our view, the following steps must be taken to move towards reaching net-zero emissions because a delay will make limiting global temperatures to 1.5C even harder. These steps are derived from professional experience in the renewable energy industry and the works of David Roberts and Hal Harvey.

Decarbonization – It will be necessary to capture the remaining CO2 from the atmosphere. Low cost measures, such as tree plantation at scale, can go a long way in capturing CO2.

Grid Flexibility – Until we have cheap, long term energy storage on scale, the grid has to be made flexible to accommodate increasing wind and solar capacity. At the same time, there have to be efforts at reducing our dependence on natural gas and find ways to maintain the grid flexibility we currently have. This is where energy storage and demand side management come in. Electric utility companies have a huge role here.

Investment in Energy Storage R&D – Starting from cyanobacteria billions of years ago to plants today, nature figured out how to convert and store sunlight for its needs via photosynthesis. It’s now in our interest to increase investment in research & development of energy storage technologies to store solar and wind energy beyond a few hours.

Electrification of (almost) all Applications – Unless we have a net-zero carbon fuel available on a large scale, applications such as space heating, shipping and eventually aviation will have to move away from using fossil fuels.

Effective Energy Policy & Market Forces – The right set of policies, which are consistently monitored and updated, such as building codes or vehicle efficiency standards, can go a long way in reducing CO2 emissions. Also, when there is a market for the services offered by technologies, such as grid connected lithium-ion batteries, it helps investors earn a favorable rate of return, which leads to deployment of the technology at scale and further helps in reducing costs.

To know more about how much progress is being made at limiting warming to 1.5C, see the Climate Action Tracker. Also, the check out the Climate Change Performance Index 2019 to see which countries are leading the efforts at Greenhouse gas emissions, Renewable Energy, Energy Use and Climate Policy. You can also check out this brief article from Bill Gates, where he explains what it will take to stop climate change.

A collaborative post by Aditya Saxena & Meenal Raval of 350 Philly