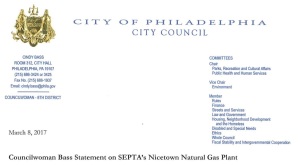 Below is text of a letter by Philadelphia Councilwoman Bass. To view on her letterhead, click on image to right.

“I have long held SEPTA in high regard when it comes to its ability to move more than 3.9 million people throughout southeastern Pennsylvania with a system that offers near precision on a vast number of routes. I would imagine that filling the transportation needs of any major city is like driving on many of those same streets—avoiding curves, potholes and pedestrians while contending with a multitude of budgetary and safety considerations. Overall, SEPTA generally gets high marks from its peers and those within the field of transportation. In 2012, SEPTA was even voted the best large transit agency in North America by the American Public Transportation Association (APTA).

But as we fast forward to today, I have great concerns regarding the installation of a power generator at the Wayne Junction train station, which is wedged in an area where Germantown ends and Nicetown begins. This generator, which would be located in what is essentially a residential neighborhood, was initially touted by SEPTA as an opportunity to maintain service for primarily suburban ridership on its regional rail line—a critical need during a time when unpredictable storms and weather patterns are occurring with more frequency.

Forward-thinking problem solving is an admirable thing. Planning to accommodate the needs of the masses in times of catastrophe and chaos is, of course, the responsible thing to do. But accountability also requires a comprehensive evaluation of what you put where, and the impact it may have on the location. Will it have a positive impact? Negative? No impact at all? Many questions, limited answers.

The answer to the question of what will be the environmental impact of the plant on Nicetown has, so far, been quite elusive. To be fair, SEPTA has done what was required of them by the U.S. Environmental Protection Agency (EPA). However, my concern is that the EPA requirements do not specifically address what the long-term effects of this type of generator would be in an urban, residential community that already suffers from a considerable amount of environmental, economic, and health-related stresses. The impact data just does not exist. There are other facilities that have similar generators, but as far as I have been made aware none are similarly situated in residential neighborhoods where large numbers of people live directly across the street.

Although SEPTA has given us every assurance that they will be a good neighbor and ensure that this generator operates efficiently and does not cause harm to the community, their track record in this neighborhood is spotty at best. It has long been known that this parcel of land has been poorly maintained; some areas are dirty eyesores while others are downright hazardous. Hence, my cause for concern is justified. Being a good neighbor does not start when someone wants something for their own benefit. It’s a continual process that reflects history and intent. Regretfully, SEPTA does not getting a passing grade on this test.

Beyond the lack of information needed to make a data-driven decision regarding this generator, my office looked at other data related to the health and well-being of area residents. Although we were not shocked, we were still surprised that the zip code abutting the train station has the highest rate of childhood asthma hospitalizations in the city of Philadelphia, and the third highest number of asthma cases; which theoretically could mean that the number of cases are more severe in this neighborhood than in any other part of the city. We suspect that other health indicators would have similar results and are currently gathering information to firmly inform our position.

Based on the considerable amount of environmental and economic stress already plaguing this community and the lack of data which could potentially provide guidance and information on the long-term effects of this exposure, we believe that the only responsible thing to do at this time is to respectfully request that SEPTA either move this power generator to another location that does not have a large residential base or hold on plans to build at the Wayne Junction site until the data can give us the critical information we need. This is the only responsible thing to do.

While I recognize that SEPTA already has zoning in place and merely needs to pull a permit to proceed on this project, I certainly hope that they can understand my concerns. Many people are under the impression that zoning could be changed to prevent the building of the generator, and because of the length of the zoning process, that makes this assumption untrue. I acknowledge that I could start to re-zone this area, likely with strong community support, but again, I know that time would not be on our side. Thus, we respectfully request that SEPTA follow one of these recommended courses of action.”

While the COVID-19 quarantine is in effect, we will not hold our general monthly meetings. Meanwhile, check out these local resources for the dealing with effects of the pandemic, and our calendar of online events.