In just over a week, President Donald Trump has issued harmful executive orders including: restructuring the National Security Council, imposing a suspension of the refugee program, reviving the Keystone XL and Dakota Access Pipelines, and banning federal funds to international group that perform abortions or lobby to legalize or promote abortions.

This rally and march was to show President Trump we stand in solidarity against these orders. The speakers included:

Below are Nicholas Pevzner’s remarks delivered this day. 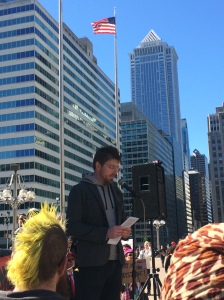 Four days into his presidency, Trump signed executive orders restarting the Keystone XL pipeline, and green-lighting the Dakota Access Pipeline. These pipelines are a bad idea—they’re a threat to the groundwater aquifers that they pass over and rivers they pass under, to farmer’s property rights and Native treaty rights. And they’re a threat to the climate.

They’re a bad idea because they lock us in an oil regime. Once pipelines start flowing, we know they’ll be in place for generations. Once built, do you think they’ll let them ever go empty while there is still oil to extract, even though the climate math says that 80% of the known fossil fuel reserves should stay in the ground if we’re to keep global warming below 2 degrees Celsius? We can’t be adding any new sources—especially none this big. This is the reason for the Keep It In The Ground movement, and for the Divestment movement and #DefundDAPL. There needs to be sustained financial pressure on the financial enablers of fossil infrastructure, to ensure that what ought to be their stranded assets stay stranded.

Even more dangerous for climate change than these two particular pipelines, is the climate-denying cabinet that Trump has assembled. It is staffed to an unprecedented extent by oil executives, science-deniers, and oil-state politicians. Ryan Zinke, Rick Perry, and Scott Pruitt in their confirmation hearings essentially said that “it’s not clear how much human activities have to do with the climate changing—the science isn’t settled.” Those statements are dishonest, and dangerous. Contrary to what they say, that science is settled. Any credible climate scientist will tell you that what is causing climate change is the release of greenhouse gases—predominantly carbon dioxide, and to a growing extent methane—into the atmosphere. If we take Trump and the GOP Congress at their word, then there is a lot at stake: they could withdraw the U.S. from the Paris Climate Agreement, kill the Clean Power Plan, re-open public lands to coal extraction, approve tons of new oil and gas pipelines, dismantle Obama’s methane rules, and hamstring wind and solar development, which are held back by an outdated energy grid. There is widespread support for a $1 trillion investment in infrastructure—but we need to advocate for it to be spent on investing in a new energy transmission grid and into a clean renewable jobs sector, not in pipelines.

Here in Pennsylvania, a growing network of natural gas pipelines is being built in our region: the Mariner East 2 pipeline, the PennEast pipeline from Pennsylvania to New Jersey, the Pinelands Pipeline through the Pine Barrens, and a whole lot of other pipelines yet to come, attempting to move all that Marcellus gas out to markets. Natural gas was supposed to be the “bridge fuel” that got us off coal, but in its growing ubiquity, it is actively preventing that bridge from ever being finished in time.

These natural gas pipelines are making making natural gas even cheaper in the short term, undercutting renewables on cost, and locking us into a fossil fuel regime that will last for generations. When it leaks, methane is 84 times more powerful than carbon dioxide as a greenhouse gas over its first two decades. Well, Pennsylvania is the country’s #2 natural gas producer, and there is over 100,000 tons of methane being leaked or flared in Pennsylvania each year. Governor Tom Wolf is trying to introduce rules aimed at cutting the leaks. State Republicans want to handicap this effort—their Senate Bill 175 prohibits state methane regulations from being any more stringent than the federal government’s, which Congress and Pruitt’s EPA are about to gut. We cannot let SB 175 become law.

We know that the climate fight is intersectional—climate change affects the most vulnerable first—communities of color, Native American and indigenous people, the elderly, the poor. Summer heat waves that kill more elderly folks in poor and minority neighborhoods than in whiter and more affluent ones. In Philadelphia, we have poor communities of color living right next to the PES refinery and near the airport, in the path of rising waters, which could carry all those refinery toxins right into neighborhoods. Around the world, changing rain patterns, droughts, ecological shocks and agricultural pests are already causing food disruptions, and these will get much worse—even at 2 degree Celsius, and dramatically worse above that.

Natural gas was supposed to be the “bridge fuel” that got us off coal, but in its growing ubiquity, it is actively preventing that bridge from ever being finished in time.

Imagine climate refugees fleeing coastal flooding and conflicts caused by drought and hunger (which is what we saw during the start of the civil war in Syria). Imagine cities going bankrupt trying to adapt to extreme flooding.

There are going to be more immediate crises where the Trump administration targets vulnerable groups directly, but those struggles and the climate struggle are connected. Climate is everyone’s problem and cuts across many of these other issues. And it goes the other way too, which is why environmental leaders like 350.org and Greenpeace have said that there can be no environmental movement without environmental justice, and no climate movement without climate justice.

Even though we know they will try to separate this coalition, we need to be unified and indivisible in these fights if we’re to resist effectively.

There will a march on Washington for the People’s Climate Mobilization on April 29. There will be a March for Science the Saturday before, on April 22—along with sister marches, including here in Philadelphia. There is the Keep it in the Ground campaign, Divestment, and #DefundDAPL.

Even more important is state legislation: There is going to be a fight against SB 175 here in Pennsylvania, led by local groups like Clean Water Action.

With Trump’s big-oil and fracking-friendly cabinet now calling the shots in Washington, we will need to fight them at the state level, work locally for green energy and green jobs, call out Philadelphia Republican state reps bought and paid for by the oil and gas lobby, and support the Governor when he tries to veto them.

I want you to get involved, march, and show up at public hearings. When the EPA or state GOP roll back regulations, as we know they’ll try to do, we need to swarm these big-oil politicians just like we did at the the airports to fight the travel ban. If we stay united and indivisible, we can slow and stop the Trump fossil fuel agenda.

Join us at our monthly meeting, Thursday, January 30 at 6 pm at City CoHo, 2401 Walnut Street, Philadelphia (enter on Sansom Street side from the parking lot).