Earlier this week, PennFuture hosted the event Standards for Cleaner Air: A Public Roundtable on Transportation Emissions in Philadelphia, a panel on green transportation that included keynote speaker State Rep. Donna Bullock (D-Philadelphia) and panelists moderated by Rob Altenburg, director of PennFuture’s Energy Center for Enterprise and the Environment.

About 100 people were in the audience, prompting PennFuture to open up the room next door. Even Altenburg was stunned, commenting that he’d never seen such a large crowd excited about clean air or transportation. 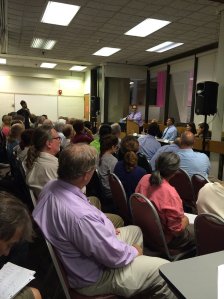 Many of the speakers spent the night extolling the benefits of natural gas, including Mr. Bandiero, who considers natural gas to be an “alternative” fuel source, and called for natural gas-powered garbage trucks.

This received considerable pushback from the audience, including from Sandy Folzer of Protecting our Waters who countered these claims by citing Physicians for Social Responsibility‘s Dr Poune Saberi’s research showing increased asthma rates near fracking well sites as well as in our city. And Mitch Chanin of 350 Philadelphia shared that there is growing evidence that burning natural gas produces very fine particulates which can lodge even deeper in lungs.

It should be noted that despite his support for natural gas over electric, Mr. Bandiero spoke about DOE’s EV Everywhere plan, and taking it statewide – they’re currently looking at where to place charging stations. This would greatly help our effort to get more electric vehicles on the road.

Then, Ms. Caum, who supported Mr. Bandiero’s call for natural gas-powered garbage trucks, did speak about indoor air quality in low income homes and said that asthma was caused by smog.

But with all due respect Ms. Caum, what causes smog? I felt she was focusing on educating people about personal health, without looking at systemic issues causing illness, such as natural gas extraction and combustion.

To our dismay, Mr. Johansen made no mention of any plans for clean energy to power the transit system. He did, however, mention that Boston’s transit agency is making millions leasing land for solar canopies, and credited that to the great SREC market in Massachusetts. I couldn’t help but wonder why he didn’t make the connection that this would also be good for SEPTA.

All in all, Rob Altenburg, not surprisingly, served as the environmentalist voice of reason on the panel. When the Earth Quaker Action Team’s (EQAT) Duncan Wright mentioned the urgency and importance of protecting the planet – of global emissions targets – and asked if each of the panelists were committed to this, Christine Knapp admitted that Philadelphia had not committed to the “80 by 50” interim goals of 40% by 2030 or 19% by 2020. Rob Altenburg then declared in no uncertain terms that “80 by 50” was not nearly enough; that Pennsylvania would need to decarbonize its economy entirely by 2035 in order to make a fair contribution toward limiting global warming to 2 degrees.

This was a surprising, yet refreshing message.

Our next step is to make our voices heard about the proposed natural gas power plant in Nicetown at SEPTA’s sustainability open house this Tuesday 8/30/2016 at noon, at SEPTA’s 1234 Market Street head quarters. Please help us keep this conversation going!